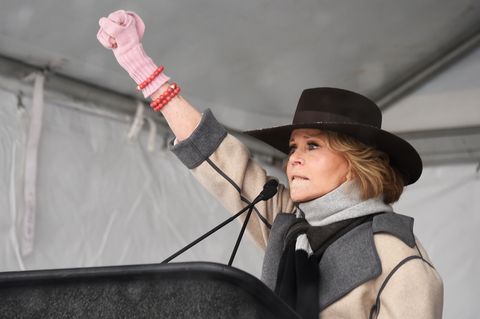 Jane Fonda is taking her Fire Drill Fridays virtual (and upgrading your at-home workout in the process). The 82-year-old actress and climate activist joined TikTok by honoring two of her most enduring passions: ’80s-style fitness and climate change activism.

In her debut video, Fonda revives some of her iconic workout moves, introducing herself to the camera and imploring people to “Google” her. “I’m bringing back the Jane Fonda workout during this home sequestration,” Fonda said, before the scene cut to her standing in a red trench coat.

“You know what? There are too many workouts happening right now on television and computers,” Fonda continued, speaking to our IG Live fatigue. “What I would really like for you to do is to work out with me for the planet.” Then she outlined plans for the first virtual Fire Drill Friday, in partnership with with Greenpeace, on April 3 at 11 a.m. PT.

She added, “There’s a climate crisis that’s a real emergency. Whether you’re on your couch or your yoga mat, would you join me for the virtual Fire Drill Fridays? The future needs you, I need you.” The digital protests will mirror the buzzy Fire Drill Fridays Fonda had posted in Washington, D.C. since October 2019. The weekly movement deployed activists and celebrities—including Lily Tomlin, Ted Danson, and Joaquin Phoenix—marching in front of the Capitol to push for action on climate change.

Leading up to the 50th anniversary of Earth Day on April 22, Fonda will highlight youth activists, along with some celebrity supporters, in weekly virtual Fire Drill Fridays. She reflected on her career in activism and plans for the future in ELLE’s April Conservation Issue. You can read Fonda’s cover story here.

Those interested in joining the virtual rallies can text Jane to 877877 for more info or register at Greenpeace USA’s Zoom website.