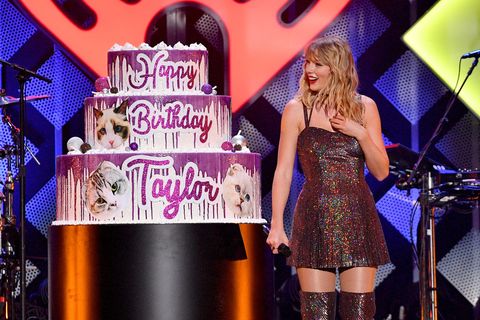 Taylor Swift flew from Los Angeles to New York to spend her 30th birthday in the city yesterday, playing Madison Square Garden for iHeartRadio’s Jingle Ball. Swift got many surprises throughout the day, from celeb birthday tributes (BTS, Katy Perry, and Selena Gomez were among the many stars to publicly wish her a happy birthday) to giant three-tiered cake. Swift graciously documented some of night, including the room full of balloons Halsey surprised her with and a stadium full of fans singing happy birthday to her.

“I’m backstage at Jingle Ball,” she said in her first Instagram Story. “I’m actually going on first so I go on at 7. I just wanted to say thank you so much to everyone who has wished me happy birthday. I’m like having the most happy, lovely, wonderful day. I just love you all so much. Thank you.”

After the show, Swift appeared to have a little after party with her friends Martha Hunt, Abigail Lucier, Jari Haile, and Ashley Avignone. Gigi Hadid was also photographed out at Madison Square to support Swift at Jingle Ball:

What happened during the show, in addition to the crowd singing happy birthday to Swift? A montage of celebs wishing Swift a happy birthday was played. Camila Cabello, BTS, Katy Perry, and Niall Horan were among the stars included:

Swift was also presented one of the biggest celebrity birthday cakes. It was three tiers, and yes, to Swift’s satisfaction, it had all three of her cats on it. “So, wow. My god, thank you so much!” she said, upon being presented it.

Swift hasn’t documented any of her post-performance festivities on her social media yet, but it’s only a matter of time.